This post is really several recipes that make up some of the menu for Machina Cantina, my (very) fledgling vegetarian/vegan Mexican food truck business. There is no truck to speak of yet, so I’m doing it in friends kitchens at parties, complete with kitschy Mexican Dia de los Muertos flags, hand painted menus and a large outward facing kitchen window standing in for a serving window. Last night was a combined 33 1/3 and 45th record themed birthday party for two awesome friends who asked me to do the Cantina for the occasion.

One of the crowd favourites is vegan chorizo which I have based very closely on the amazing Isa Chandra Moscowitz’s sausage recipes from Vegan Brunch. Isa’s recipes have changed my vegan cooking life! Damn can this woman make tasty food! You can see her full recipe over at her Post Punk Kitchen site but basically it is mashed beans, gluten flour,  tomato paste, and an array of spices that make up the different flavour profiles of the sausage. To give the chorizo a mexican feel for the cantina, I load it up with smoked paprika, cumin, chipotle powder, and a good dash of Slap Ya Mama seasoning. The recipe is actually quite quick and easy to make. You mash the beans (I use borlotti beans), add the rest of the ingredients and combine until it becomes a huge sticky ball. 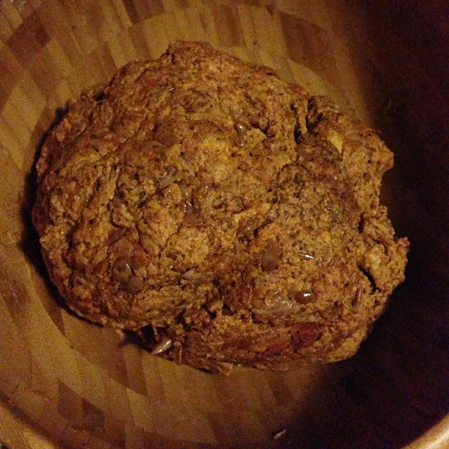 When you are kneading this dough, the gluten flour (or vital wheat gluten) will make the mixture dense and form stringy strands that bind the dough together. Once you get the right consistency as in the picture above, you separate it into even pieces (Isa’s basic recipe will make four large sausages), roll into a rough sausage shape, and then wrap them in foil, twisting the ends to ‘snap’ the dough into shape. 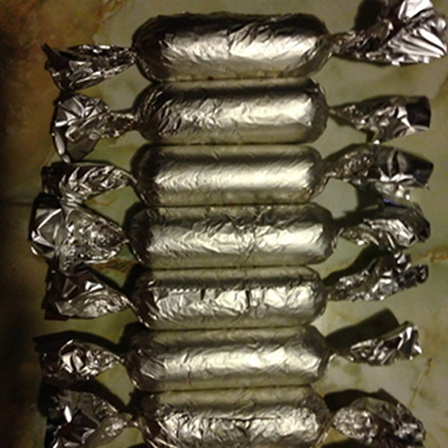 You then steam the chorizo for 40 minutes, unwrap and let them cool. I have stored these in the freezer for a week or so and then defrosted them and they have bounced back brilliantly.

These sausages form the base of Machina Cantina’s The Luchador –  chopped chorizo fried with onion and fresh coriander, salad, guacamole, cheese (optional if you are vegan), and fresh hand pressed corn tortillas (these babies deserve their own post! Stay tuned..). 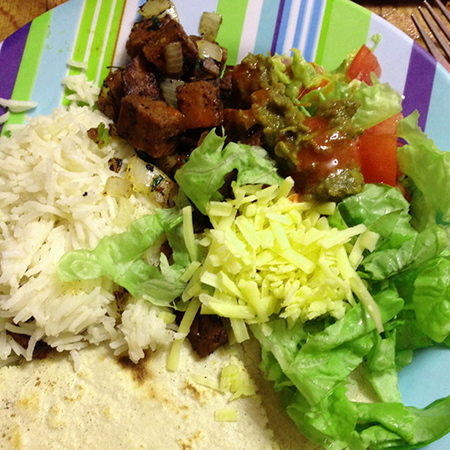 As it’s that time of the year in the garden, I have an abundance of chillies and decided to make a roasted green chilli salsa to up the spice factor for those who like it hot!

Place the chillies in a baking tray with tomatoes, onions, and garlic cloves, drizzle with olive oil and sprinkle with a decent pinch of sea salt. Roast them in a 180 degree oven for about 40 minutes, remove the tops of the chillies and the garlic/onion skins. Place this mixture in a food processor and add the juice of one lime, and fresh coriander. Pulse to combine and then process until the mix is only slightly chunky. Taste for seasoning – if you find it slightly bitter, balance the flavour with a sprinkle of sugar or a little agave syrup. 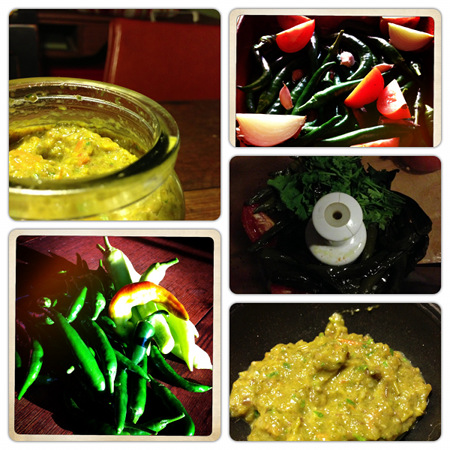 Last night was also my churros debut! Churros are a Spanish ridged donut served with a chocolate dipping sauce. I based my recipe on Clare Thomas’s Kitchy Kitchen Churros con Chocolate, and served it with a raw chocolate sauce that my friend Jacqui whipped up and I unfortunately do not have the recipe for! Suffice to say, it was delicious and based on tahini, cacao, and agave.

The churros themselves are a mix of butter, sugar, salt, water and flour combined in a hot pan to make a par cooked dough. You can use a pastry bag with a starred tip, or a churrera (available from Latin/Mexican supply stores – mine is from Casa Iberica in Fitzroy) to squeeze portions of the dough into hot vegetable oil, fry until golden, and then dip them in cinnamon sugar. I am also really excited to say that we made a second batch of the churros with gluten free flour and they were delicious!! We served them in Mexican shot glasses with a spoon of the raw chocolate sauce in the base and they were a definite 2am hit with the hungry crowd! 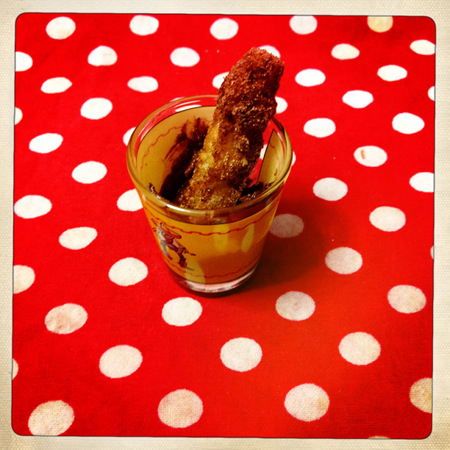 Do you like Mexican food? What’s your favourite Mexican dish?

One thought on “Vegan Chorizo Tacos and Churros”